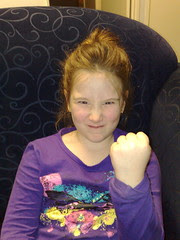 Lilly came in to my office the other day. “Dad I have to go out now. Can you get the TV to record my favourite show in an hour”.

But she had an intensity in her eye that made me realize I ignored this six year old at my peril, despite my displike of leaving my desk while in the middle of solving a problem.

Happily, I didn’t have to get up from my chair. I just logged in to IceTV, found the program she was interested in, and told my PVR to record it via the website.  My PVR is a High-Definition Beyonwiz DP-S1. It’s wireless, but I’ve wired it in to the house LAN so we can watch movies from our D-Link DNS323 1TB NAS

We also have an older Topfield 5000 PVRT.  It’s only standard definition, but the cool thing about it is that it has an open programming interfacem , so a lot of people have written their own software to get it to do cool things.  One application I added to it was ToppyPC by John De Angelis.  It has a program called “TWIN” which adds a web page to your Topfield PVR.  So you can set timers, and record shows, like IceTV lets you do with the Beyonwiz.   ToppyPC needs another utility to run – an FTP server (ftp4t by Aldarin) which runs on a PC which I connect to the Topfield via a USB cable.

All this technology is both good and bad. It’s convenient, but I don’t get the exercise I need going up and down stairs to program the PVR!

But at least I don’t have an angry six-year-old to contend with!